Quarter 2:
"What were the critical elements in America driving social reform at the beginning of the Twentieth Century?"

"Never in the field of human conflict was so much owed by so many to so few."
~ Sir Winston Churchill, British Prime Minister 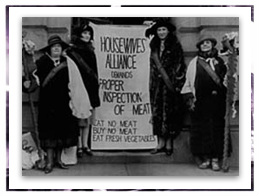 Meat Inspection Act 1906
Expanding the American frontier westward through the Homestead Act and settlement, a transcontinental railroad  and the mining boom each brought a bright spot into America's vast future. They would also reveal, however, new challenges to be faced as America desired to expand into the western territories. The Battle of Wounded Knee would prove to be distasterous for the American Indians as they were defeated pushing them off their lands giving way to America's manifest destiny.

America's heartland was not the only place facing rapid growth and change, however. The year 1900 brought industrialization to a new America with the growth of cities and tha changing faces of immigration. The promise of advancements in technology, science and big business brought vast economic growth to america with iron and steel mills and coal plants popping up all over America, especially in the northeast region. The growth of the American Industrial Machine brought immigrants from all over the world to a new land in search of their hopes and dreams. America began to increasingly become a nation of immigrants as 2 waves of immigrants from across Europe flooded into America looking for new opportunities and a better life for their families.  With them, they brought
their rich cultures and traditions that they had hoped to pass on to their
children. Eventually, they would create a "melting pot" mixing together many of
their cultures and traditoons to create a new American culture. In the meantime,
though, they establised ethnic neighborhoods, where they found temporary comfort
living among those who spoke the same language, practiced the same religion and
enjoyed the same traditions. The harsh realities of life in the new world were a
far cry from the "streets paved with gold" that they had been promised, however.
Instead of finding good fortune, most immigrants found much turmoil and hardship
on the other side of the Atlantic beginning with the customs process on either
Ellis  Island and ending in their own back yards with the poor, overcrowded and
unsanitary conditions of the cities that they began to call home. In places like New York City, there was such a huge migration of immigrants flooding into the city that the city quickly grew in population and to overcompensate for that, people began living in settlement and tenement houses. Their conditions may have been unsanitary and not the best, but it quickly became home (and more that they ever could have hoped for back home). They, too would help to begin to develop an America that was unique, assimilating a new American culture and tradition. And so Americans turned their focus inward toward moving forward ~ making major progress socially, economically and politically.  As industry and big business grew bringing a wealth of jobs and prosperity to American, many of those who were helping to make the "dream" happen were exposed to the "underside of progress". America's dark side included things like cheap immigrant labor, unsafe, unfair & unsanitary working conditions for factory workers and child labor. Also, the abuses of big business and those who "exploited the poor" in favor of making the all mighty dollar. With this  brought rise to those who called themselves Progressives or forward thinkers.  As the first decade of the 1900's progressed, the new breed of Progressive Americans who were interested in "forward thinking" began to help America evolve. Progressive reformers like trustbusters & PresidentsTeddy Roosevelt and William Howard Taft worked to break up trusts and monopolies while promoting competition in industry. Upton Sinclair who wrote "The Jungle" exposing the abuses of the meat packaging industry and Jacob Riis who photographed exposed the evils of child labor and immigrants living in tenements. Finally, The passage of Constitutional Amendments that established the first ever income tax (16th), banned alcohol (18th) and gave women the right to vote (19th).

Progressive's efforts concentrated on the outlaw of the sale of alcohol;
regulation of child labor and sweatshops; scientific management of  natural
resources (Conservationism); insuring pure and wholesome food and drugs (Pure Food and Drug Act 1906) (Meat Inspection Act); Americanizing immigrants or restricting  immigration altogether (Chinese Exclusion Act) and busting or regulation of  trusts (Interstate Commerce Act/Commission). Drawing support from the urban, college-educated middle class, Progressive reformers sought to eliminate corruption in government, regulate business practices, address health hazards, improve working conditions, and give the public more direct control over government through direct primaries to nominate
candidates for public office, direct election of Senators (17th amendment), the initiative, referendum, and recall as done by "Battling Bob LaFollette" of Wisconsin. This was the America whose dream was the creation of pure democracy. The election of 1912 brought a "New Freedom" and a new vision to the White House in the form of President Woodrow Wilson. And it will be that vision for democracy and its preservation that will be tested as America enters World War I in 1914.