“To know the present, we must not forget the past.”
~George Santayana

Why do we study history?

History, by definition, is “a record or study of important past events, often with explanation of their causes.” (World Book, 2003) We study history to learn about ourselves, reflect on the past and present and to make determinations about out future.
GOT BALANCE?  ROUTINES are good!  While you are home, it will be a good idea for you to start a daily routine that works for you. You can use the following as a guideline and/or create your own version. It  will help you learn how to create balance, feel more positive and be productive with your time on your own: 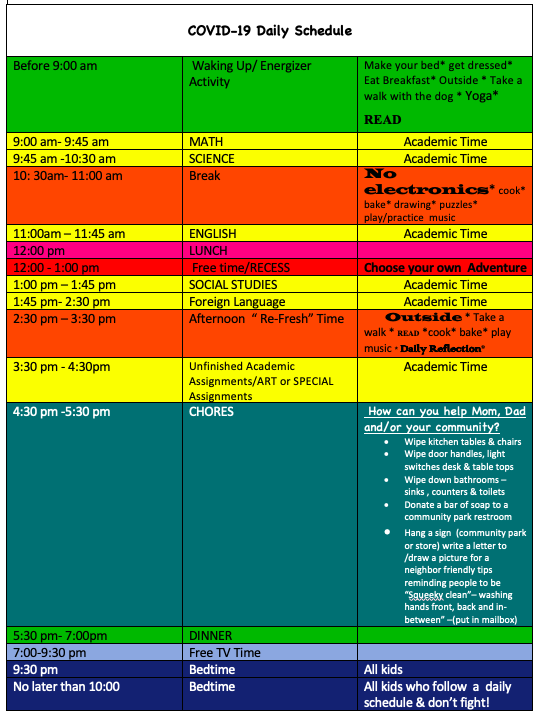 Grade 8 Only:
Enduring Issues of Freedom:
Statue of Liberty
and
Ellis Island


" Give me your tired, your poor, Your huddled masses yearning to breathe free,
The wretched refuse of your teeming shore.
Send these, the homeless, tempest-tossed to me,
I lift my lamp beside the golden door! "
- Emma Lazarus, The New Colossus. 1883

Students in grade 8 will begin their year by walking Modern Time's own Freedom Trail. Our day will begin with a tour of the Statue of Liberty and Ellis Island and end with them exploring our rich immigration history on Ellis Island.

Statue of Liberty, a generous gift from the people of France marking our nation's recognition as an independent country was dedicated on October 28, 1886. She stands a remarkable 305 feet  high and weighs an impressive 225 tons. The eleven point star pedestal makes up her 65 foot foundation. Students will explore the island and climb the pedestal before embarking on the second leg of their journey to Ellis Island.

From 1882 to 1954, Ellis Island was the busiest immigration station in the United States. The Dutch arrived, and Ellis, Liberty and Black Tom Islands were originally called Oyster Islands. Ellis Island had several names before it was acquired by Sam Ellis during the American Revolution. The island was leased in 1794, and eventually it was ceded to the U.S. in 1808. It served as a military post until it became an immigration station. Ellis Island was also nicknamed 'Heartbreak Island', and 'The Island of Tears' because of the amount of those denied immigration. To be admitted to the U.S. at Ellis Island, the government wanted immigrants to have at least $18. This was so that they had money to support themselves while they established themselves in the United States.
​
During  and after World War II, the island was used to detain approximately 7,000 Japanese, Italians and Germans, believed to be spies or guilty of sabotage. In order to gain entry to the U.S., immigrants were required to answer 29 questions. Students will have the opportunity to explore and appreciate the rich heritage that makes up our country and appreciate the process by which we all have become modern Americans.

Philipsburg Manor was a thriving farming, milling, and trading center owned by the Philipses, a family of Anglo-Dutch merchants. They rent land to tenant farmers of diverse European backgrounds and rely on a community of 23 enslaved Africans to operate the complex.

Interpreters in period costume invite you to stroll through the farm, with historic breeds of oxen, cows, sheep, and chickens. Participate in hands-on activities of the 18th century and learn the riveting yet little-known story of enslavement in the colonial north.

Step into the working gristmill, where, surrounded by the sound of rushing water and the creaking of wooden gears, you learn about the skills of Caesar, the enslaved African miller. A colonial bateau tied to the wharf reflects the flourishing river trade and the skills of Dimond, an enslaved riverboat pilot.

Tour the 300-year-old manor house. Its dairy, kitchens, bedchambers, warehouse rooms and parlor attest to its significance as a place of work, business, trade, leisure, and repose. Period artifacts and touchable reproductions give you an understanding of the people who lived and worked here.

Visit the activity center and explore the foodways, textile production techniques, and medicinal practices of Philipsburg Manor's inhabitants. Shell some beans, work flax into linen, or produce a tray of ship biscuits. Nearby is the slaves' garden, with vegetables and herbs for consumption, market, and medicinal purposes.

Enter the new world Dutch barn and help thresh some wheat. With its pastoral setting, rich social history, hands-on activities, and demonstrations of colonial life, Philipsburg Manor provides everybody with an unforgettable experience. 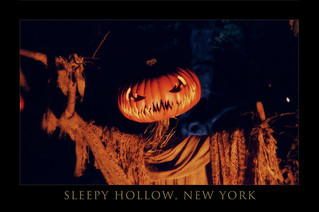 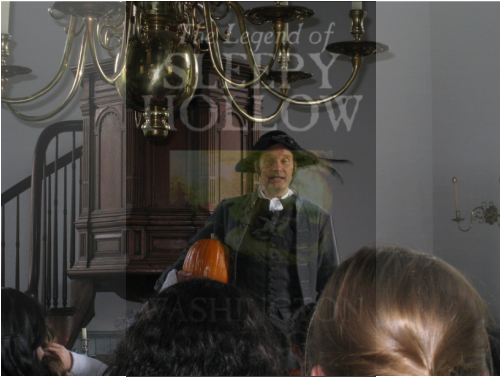 Save the Date~
PROFESSIONAL HISTORICAL READING:
Irving's "Legend" and Lore of Sleepy Hollow

The live narrative reading by professional storyteller Jonathan Kruk describes the story's setting, creating images of a quaint, cozy Dutch village in upstate New York on the the Hudson River ... "one of the quietest places in the whole world," in a "remote period of American history". The village is not just far away and long ago; it is a magical place, "under the sway of some witching power, that holds a spell over the minds of the good people ....  We will visit the Old Dutch Church and learn about the truths, the myths and the legend behind the place as Irving's legend is masterfully brought to life. 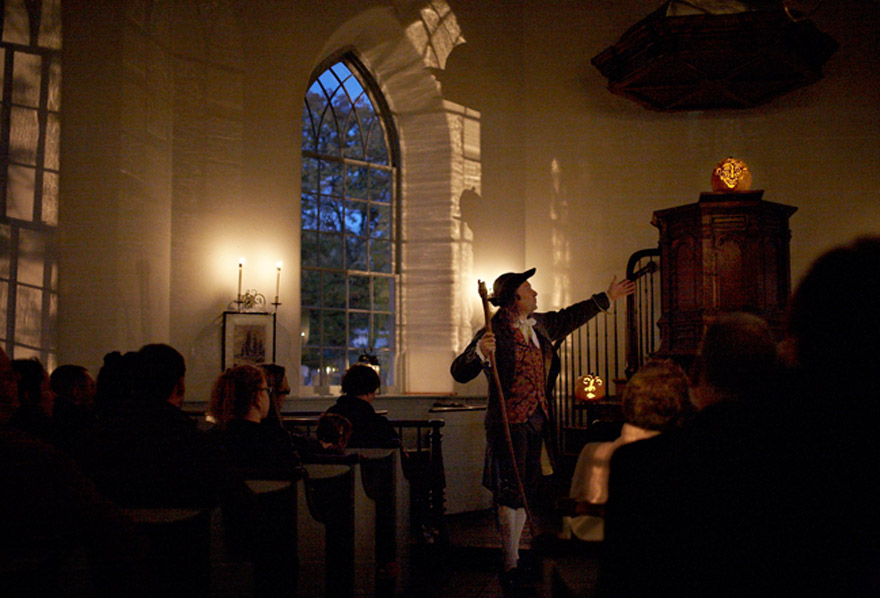 Master Storyteller Jonathan Kruk tells the story of "Legend of Sleepy Hollow" during a performance at Horseman's Hollow. October 2013