Quarter 1: One Nation, Under God, Indivisable?

in'di'vis'i'ble ~ not divisable; incapable of being divided, separarted or broken; not separable into parts 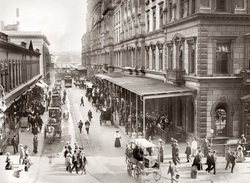 Grand Central Station, NYC 1908
\The war between the states brought death and destruction across our great country from 1861-1865. More Americans died in the Civil War than in World Wars I and II, Vietnam and Korea combined. This was because it was indeed a war of America against itself ~ brother vs. brother. Abraham Lincoln saw into the future and knew that a "house divided against itself can not stand", that this country could not endure permanently half slave and half free. And it was so on April 9, 1865 that it did not.The war came to an end with Confederate General Robert E. Lee surrendering at Appomatox Courthouse, Virginia to the North. The Union had won.  Unfortunately, Lincoln did not live to see the new future of America as he was sadly assassinated by actor John Wilkes Booth on April 15, 1865. Caroline Cowles Richards was a young woman of twenty-three living in Canandaigua, New York, a farming village in the state's Finger Lakes region. Caroline kept a diary of her daily experiences and reveals the sacrifices the community made as the war progressed. Many of its young men joined the Union Army and the villagers closely monitored the news from the war front. Sadly, a number of those who went off to war did not return, losing their lives on the battlefields of Gettysburg, the Wilderness, Spotssylvania, Petersburg and others. Caroline's diary was published in 1913 .

On the death of Lincoln ..."How soon has sorrow followed upon the heels of joy! One week ago tonight we were celebrating our victories with loud acclamations of mirth and good cheer. Now every one is silent and sad and the earth and heavens seem clothed in sack-cloth. The bells have been tolling this afternoon. The flags are all at half mast, draped with mourning, and on every store and dwelling-house some sign of the nation's loss is visible."

And so it would be Andrew Johnson, Lincoln's vice president from Tennessee, who would be left to lead the seemingly indivisable country through the period of Reconstruction. During Reconstruction, it was Lincoln's intension to reunite the country along with giving former slaves (freedmen) their freedom. Through the Freedmen's Bureau and many other special programs, the government sought to try to help America heal and realize it's dream of true democracy where "all men are created equal" through the passage of the 13th, 14th and 15th amendments. However, Andrew Johnson's conservative plan for reconstruction was not received so graciously from many in Congress who felt the southern rebels should be punished and therefore he suffered much hardship and was practically impeached during his presidency. And the Supreme Court reminded us in 1896 that segregation in the south would be allowed to continue with their ruling in the case of Homer "Plessy v. Ferguson"declaring that "separate facilities for blacks and whites were allowed, as long as those facilities were equal".  Jim Crow ( Laws) allowing segregation had invaded the South and appeared to be here to stay. American would have to wait until 1954 for "Brown vs. The Board of Education of Topeka" to overturn "separate, but equal" declaring it to be unconstitutional. What saved America from the whoa's of Reconstruction was eventually their focus on the dawn of a new century. Expanding the American frontier westward through the Homestead Act and settlement, a transcontinental railroad  and the mining boom each brought a bright spot into America's vast future. They would also reveal, however,new challenges to be faced with the American Indians as we would see in the Battle of Wounded Knee.

The year 1900 brought industrialization to a new America and the promise of advancements in technology, science and big business. And so, Americans turned their focus inward toward moving forward and to making major progress.